Being so close to the sea it would be a shame to come down and stay in our holiday cottages and not find time to indulge in some excellent local sea food. We are rather spoilt for choice but one restuarant that definitely tops the list is the newly opened Club House at West Bexington, about a 10 mile drive from the cottages along the beautiful Coastal Road (B3175) towards Bridport. It is owned by the same family that runs the Hive Beach Cafe and the watch House Cafe and despite only having been open for a year or so, has already been awarded an AA Rosette for culinary excellence. The restaurant makes the most of local relationships with fresh vegetables coming from the adjoining organic Tamarisk Farm and cheeses from the award winning West Country Farmhouse Cheesemaker at nearby Ford Farm. You are even able to sample some local truly English sparkling wine and house champagne from Bride Valley Vineyard.
Probably the best way to describe the Club House is to include this recent review by foodie Mark Taylor writing for the Western Daily Press which is included below.

Before you start reading the review here is a sample menu to whet your appetite- click here for a PDF version to open in a new window. 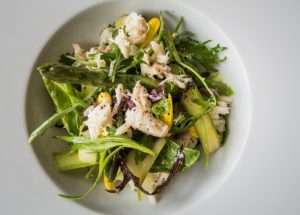 ”It’s a long running joke in my family that I don’t actually work at all. My daughter tells her friends many of whom have parents who are doctors, barristers, bankers and people with ‘proper jobs’ – that all I do is eat and drink in restaurants and pubs. It’s no wonder we don’t get any invites to dinner parties.

For a fleeting moment during lunch at The Club House, I could see their point. As I sipped my glass of chilled white wine and tucked into plates of locally caught seafood, the sun was beating down from a cloudless blue sky and reflecting off the sea in front of me.

It was one of those rare moments even I felt pangs of guilt for telling people that reviewing restaurants pays my mortgage and puts food on the family table at home. I would probably hate me too. Still, I kept convincing myself that I was there to work as I basked in the early spring sun and surveyed the scene from my window table.

This was my first time at The Club House, which opened last year in West Bexington, literally on Chesil Beach. An extended New England-style white bungalow accessed via the organic Tamarisk Farm (which supplies the vegetables), it’s run by the same team behind the more famous Hive Beach Café at Burton Bradstock.

The Club House has a fascinating history. Built in 1932, it was originally created as part of a holiday village with beach huts and an Olympic-sized outdoor swimming pool. The outbreak of the Second World War scuppered all plans for West Bexington to become the successful holiday village it hoped to be and the club house became a café and shop for years. 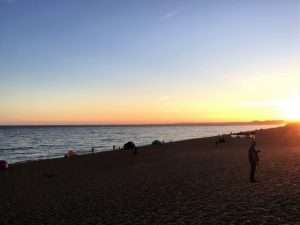 You can still see where the filled in swimming pool was. Slap bang on Chesil Beach and separated from the pebbles only by a car park, The Club House has enormous appeal as soon as you arrive. It feels like a genuine find.

Step inside the Art Deco bungalow and there’s an open kitchen and a dining room decked out with 1930s light fittings, old red and white life rings, tongue and groove panels the colour of the sea and clotted cream walls dotted with monochrome photos.

The look might be more New England than Jurassic Coast but there’s a real sense of place as soon as you look at the drinks list with its Lyme Bay Winery Shoreline white wine, West Dorset-distilled Black Cow vodka and a cocktail named after inventor and scientist Sir Barnes Wallis, who tested his Bouncing Bomb on Chesil Beach.

A restaurant that caters for everybody, my fellow guests included school holiday families, retired couples dressed to the nines and windswept, muddy-booted walkers enjoying pots of tea on the terrace outside.

I had intended to order from the new spring set menu, which is brilliant value at £20 for two courses (or £25 for three), but there were simply too many distractions on the a la carte and specials board to tighten the purse strings and not jump around the menus. At £12,50, a special of baked scallops with wild garlic and hazelnut crumb butter wasn’t exactly bargain basement but it was the most memorable starter I’ve had all year. Served in the shell, the three enormous bivalves were the size of a baby’s fist and cooked with precision until opaque and quivering. The crunchy wild garlic topping boasted a generous grating of punchy Berkswell sheep’s cheese for extra flavour and tang. It was a deceptively simple dish, but I haven’t stopped thinking about it since.

To follow, a spankingly fresh and thick-flaked fillet of cod (£17) was roasted with a top layer of smoked anchovy butter, which provided a rich contrast to the pearly white, clean flavour of the fish. Crushed heritage potatoes and kale from Tamarisk Farm next door tasted like vegetables that had just been picked and carried down the lane, which they had been earlier that morning. Jumping back to the main menu, an individual apple and blackberry pie (£6.50) with the crispest, butteriest pastry and served with a delicious dry cider and apple sorbet was exemplary and screamed ‘West Country’.

The kitchen is run by chefs who have worked for Dorset’s very own Mark Hix at his Lyme Regis restaurant and at The Ivy in London and it shows in every detail and every hat tip to seasonality and provenance. The Club House is a relatively new addition to the already impressive Jurassic Coast food scene but it’s a genuinely exciting discovery. If anything, it hasn’t yet realised just how special it is but it won’t be long before everybody’s trying to get a table so beat the rush before the summer.

One thought on “The Club House Restaurant in West Bexington, Dorset.”

This site uses Akismet to reduce spam. Learn how your comment data is processed.